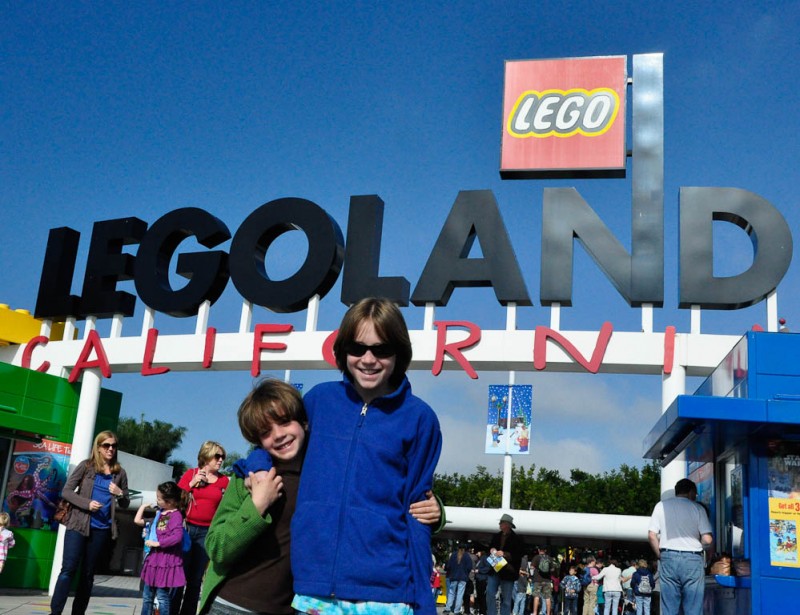 The Big Dude is a Lego fanatic. He has been passionately building Lego’s since the age of 5. So, it worked out well that his birthday happened while we were within an hour of Legoland. A trip to the amusement park of his dreams became his 12th Birthday present. 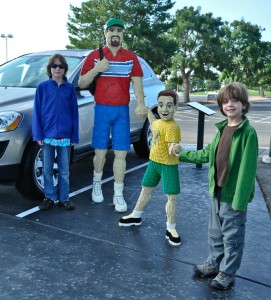 above: The Dudes hangin’ with a “Lego Family”.

The day started out well when the Mother of the family in front of us at the entry gate turned and said “would you like a coupon?” My ears always perk up at the sound of coupon. I had tried a few days before to find some way of getting discounted tickets but, as usual, there’s always fine print or special circumstances that make the potential discount useless to us, so I had given up. And now, somebody was actually handing us coupons that we could use! I thanked the woman profusely then headed to the gate. The Dudes both got in for free (normally $60 each), yippee! 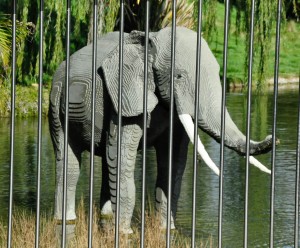 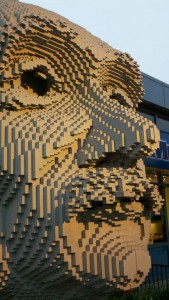 My Mother and In-laws joined us as we started our day in a building that has bins full of bricks to build racing cars and tracks with timers to race your creation against others.  When one of their vehicles didn’t win, it was back to the bins for modifications and then a rematch. All of the boys, Dad and Grandad included, got so involved that I thought we would be there all day. 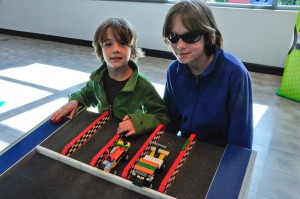 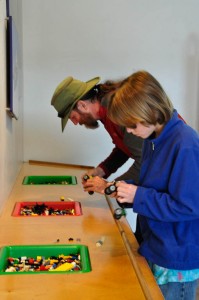 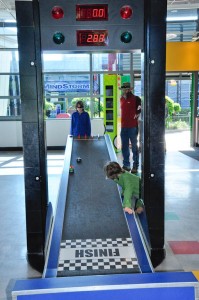 When we finally convinced them to move on, we went to miniland where popular sites from around the U.S. and scenes from Star Wars are re-created in miniature with exact detail and millions of bricks. The Big Dude is also a Star Wars fan so the combination of Lego’s and Star Wars was the ultimate experience. 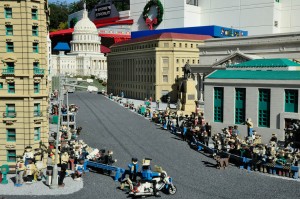 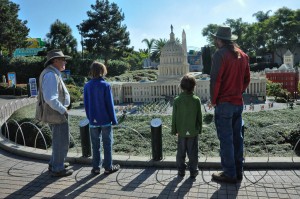 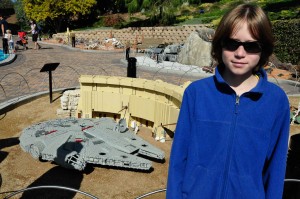 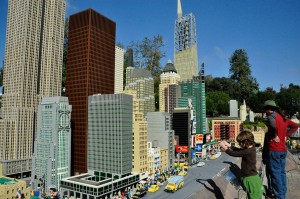 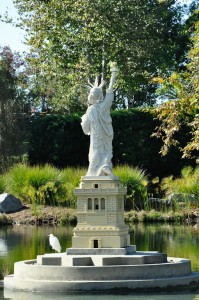 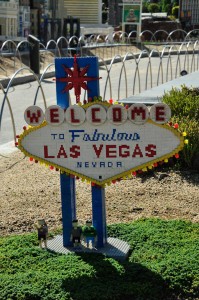 Nearby was the Lego Shop where the designers and builders work. Like a fishbowl, there is a large glass window where you can see into their world. The walls had floor to ceiling shelving with bins of bricks. In the center of the room was a table with two men and a woman in their 30’s. They were discussing, jotting down notes and laughing. At another table was a man in his 70’s focused, bent over a table, building. All of a sudden, I saw the Big Dude’s future. 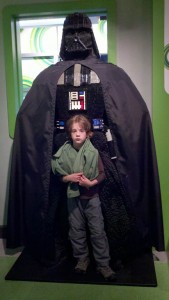 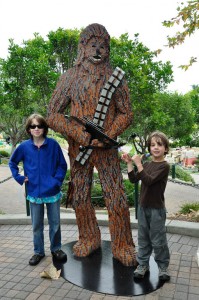 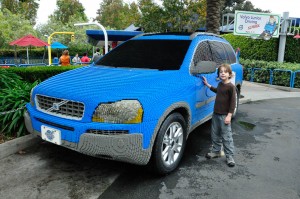 I assume that these are the people that maintain the sculptures and design and build new exhibits for the park. One of the most enjoyable parts of the park was to see all of the sculptures decorating the grounds. Except for miniland, everything was built life size or bigger. Some were placed so the kids could climb on and interact with them. Others were placed like a natural part of the landscape like swans on a lake. 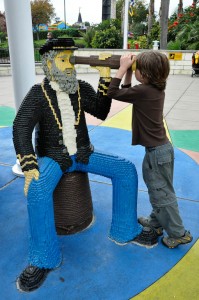 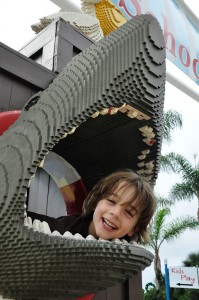 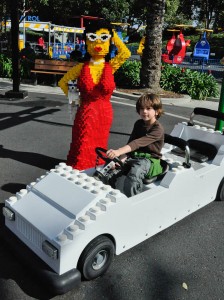 above: Could this be a glimpse into the Lil’ Dudes future?

Since the focus was on Legos, there were just a few gentle rides which were a nice introduction for the Dudes since they have never been to an amusement park or ridden any rides before (really). After experiencing the rides, the Lil’ Dude is now ready for the ultimate in all roller coasters (wherever that is). The Big Dude, however, would prefer to stick with a trip to the Lego robotics room. 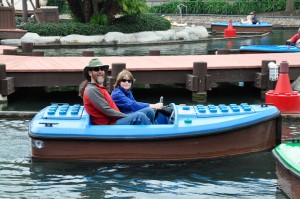 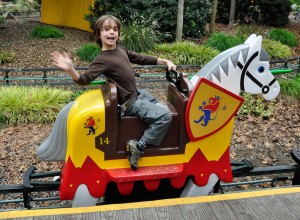 The robotics area offered a class in robotic medical procedures like giving a shot. The Hippygeek and Grandad joined the Big Dude for the class and they all came out shaking their heads to indicate their skills may need some work. 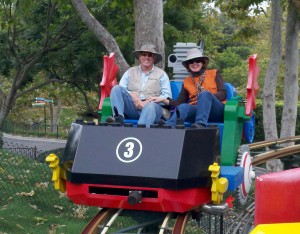 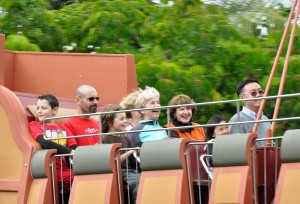 right: The Lil’ Dude, Amah and Granny go for a ride. 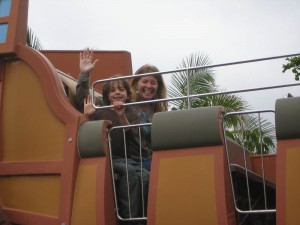 We managed to visit most areas of the park and finally made our way back to the entrance just in time for them to close the gates. The Big Dude seemed pretty happy about his 12th Birthday and I’m sure it is one that he will remember forever. 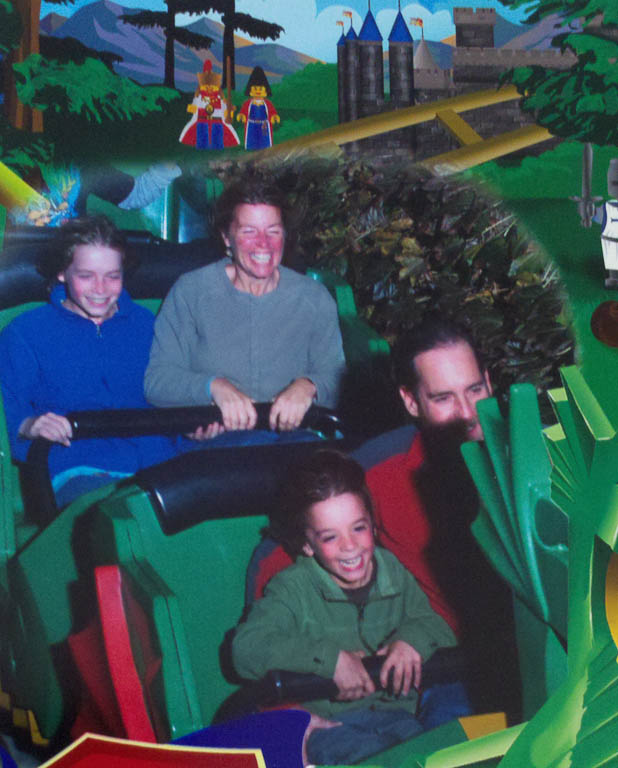 above: The Dudes go for their very first roller coaster ride, whoppeee!

“Today was good. Today was fun. Tomorrow is another one.” Dr. Seuss

This entry was posted in Dawn Deliberates and tagged Birthday, Legoland. Bookmark the permalink.