The Lil’ Dude Rides a Bike 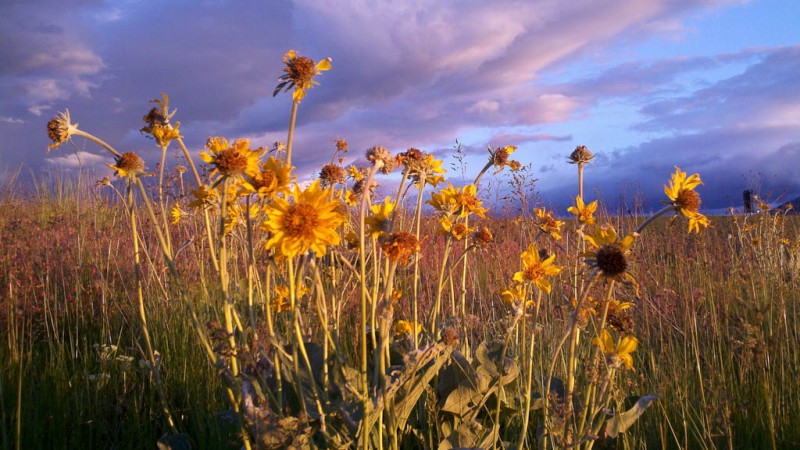 Learning to ride a bike is one of those milestones of childhood; some learn to ride quickly and early, others, slowly and sometimes painfully. The Lil’ Dude falls somewhere in between and a trip to Jellystone RV park in Missoula Montana was the ticket to reaching that milestone.

After several consecutive days of driving, we decided to chill out for a few days in Missoula. The town also had some bigger stores that might stock some supplies that we needed to make some minor repairs. 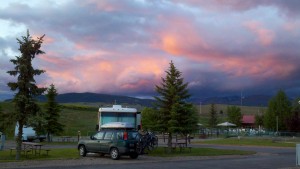 We had just seen the movie Yogi Bear so when it came down to deciding between Jim and Mary’s RV Park or Jellystone RV Park, the Lil’ Dude was adamant about staying at Jellystone. He even pulled $4 out of his wallet to pay the difference in price to make sure that we went to Jellystone. 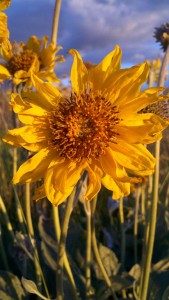 The Park, located in a beautiful Valley, was large with wide paved roads and almost devoid of campers, a perfect place to ride bikes. The Big Dude had already discovered the joy of riding around campgrounds and immediately hopped on his bike. The Lil’ Dude sat eyeing his big brother envious of his ability to ride even though he had refused to get his bike out so far on the trip.

We had taken the training wheels off two years earlier and bought a new bike for him last year in preparation for the trip. All he had been able to manage was a wobbly 50 ft. of riding after a push off from Mom or Dad and dramatic crashes to stop. We were looking forward to family bike rides but up until now it wasn’t possible without the Lil’ Dude participating.

Not being able to stand watching his brother ride around yet another campground without him, he got out his bike out and tried over and over and over again. There seemed to be a determination there, an I will not fail this time attitude that I had not seen before whenever he tried to ride. 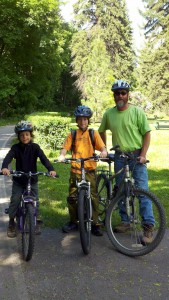 By the end of the first day, he was riding. Not confidently but able to start almost every time and only crashing to stop about half the time with full loops around the park in between. By the second day he was starting and stopping confidently on his own and would ride every street in the park before taking a break. He passionately rode every minute that was available. We decided to spend two more days at the park just so he could develop his skills and confidence.

With very few campers at the park, we were able to view the Dudes riding every street in the park, together. Around and around and around they went. By the end of the third day, we decided it was time to find a bike trail to do our first family ride. 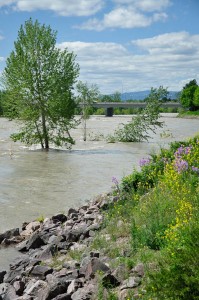 Our first choice was a trail by the river that cuts through downtown Missoula. But, when we got there, the river was in a flood stage and the bike trail along its edge often dropped off to the raging waters below. I had visions of the Lil’ Dude losing control, going over the edge, never to be seen again. So, we decided to move on to plan “B”. We found another trail that meandered gently through the woods with no potential dangers and had our first successful family bike ride, yeah! 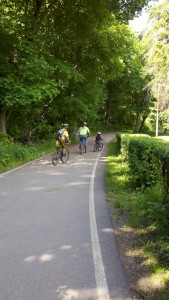 above: the Clark Fork River in flood

Missoula turned out to be a great place to chill for a few days. It is a pretty city surrounded by mountains and with the presence of a University, a young progressive feel. We attended a free concert in the park, a great playground and enjoyed amazing sunsets. 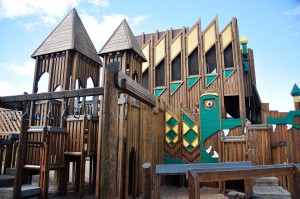 right: the best playground yet! 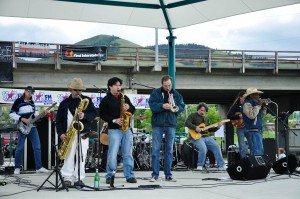 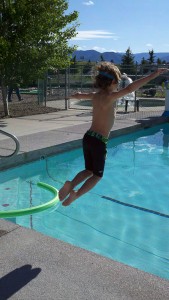 The Jellystone Park also had mini-golf, always a hit, and a pool. From the relaxing atmosphere to the bike riding success, the Lil’ Dude’s choice to stay at Jellystone was the right one. I guess he is smarter than the average bear.

“One of the most important days of my life was when I learned to ride a bicycle. “Michael Palin

This entry was posted in Dawn Deliberates, Kadenisms and tagged bike. Bookmark the permalink.

2 Responses to The Lil’ Dude Rides a Bike